Why I Became a Buddhist Monk,
Why I Quit and What I Learned

I was on a quest. Unhappy with everything I'd learned in England, I hitchiked to the end of Europe, through Turkey, Iran, Afghanistan and Pakistan, and ended up in the north Indian village of McLeod Ganj, seat of the Dalai Lama in exile. There I was trained by the last generation of lamas from free Tibet.

Some things made sense, some didn’t. The philosophy answered all my questions—but was that really the point? Also, the rituals were indecipherable, and most peculiarly it seemed I was expected to believe in invisible demons.

Although the Tibetans had created a systematic philosophy and an impressive historical institution with absolutely mesmerizing iconography, I could barely relate it to the Buddha’s core teachings. The more I studied him, the more I saw him as subversive to any institutionalization or belief system.

My final breakthrough was completely unexpected and horribly simple. After eight years of intense study in India, Nepal, Sri Lanka and Switzerland during which I'd learned Tibetan, mastered the philosophy and become intimate with their scripture and culture, I realized I’d never be “one of them,” and left.

The Novice is the tale of how all that unfolded.

“In the beginner’s mind there are many possibilities, but in the expert’s there are few.”
[Shunryu Suzuki: Zen Mind, Beginner’s Mind]

“A wonderful achievement, gripping and calmly insightful by turn, honest to the point of being a sustained howl of pain at times, with some brilliantly succinct portraits of the author’s teachers and friends.”

“Stephen Schettini’s The Novice is a lively read with a deep meaning, entertaining us with a fascinating slice of life while encouraging us to use our short lives in a fruitful way—not settling for some half-alive, blind following of routine. I enjoyed its keen portrayal of outer landscape and inner terrain of emotion and intellect, its humor, and the nobility of the author’s struggles, told with ruthless honesty and understated humor in an engaging combination. I recommend it enthusiastically.”

“What a story! By turns epic and heroic, tender and touching, The Novice imparts a hugely important lesson to our times. It is a gift to every Western seeker of the ‘spiritual’ East. With the seductive verve of a novelist, Schettini tells a subversive and liberating tale.”

—Glenn Wallis, Pd.D. Author of The Basic Teachings of the Buddha, The Dhammapada, & Mediating the Power of Buddhas 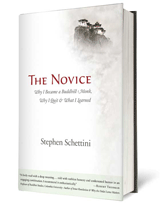